The Association of Community College Trustees has released a new study analyzing student debt and default rates at Iowa Community Colleges. The report is especially important given that students at community colleges are more likely to default on student loan debt than at other types of higher educational institutions. 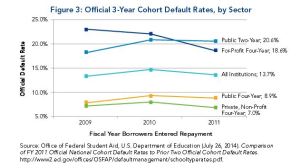 One of the major findings was that students were more likely to default if they were not making progress toward the completion of an Associates Degree or other types of diplomas/certifications. According to the report

Students with the least amount of credits completed were the most likely to default on their loans.

The Federal government has released new data on American colleges in an effort to help students choose where they want to study. According to Inside Higher Education

These new data show publicly, for the first time, the share of a college’s former students who make some progress in paying down their federal loans within the first three years after leaving college. And they provide the first comprehensive look at how much students who receive federal loans and Pell Grants end up earning after they leave a specific college, both in the short term and long term.

The College Scorecard is available at https://collegescorecard.ed.gov/