A story co-published in ProPublica and The Chronicle of Higher Education shows that poor students are receiving less financial aid from public universities at the same time that wealthier students are given larger scholarship packages. This chart shows how these trends have developed since 1996: 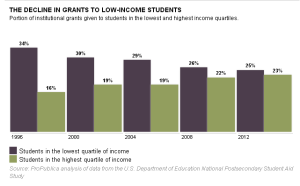 There are several reasons for why this shift has taken place.

“For some schools, they’re trying to climb to the top of the rankings. For other schools, it’s more about revenue generation,” said Don Hossler, a professor of educational leadership and policy studies at Indiana University at Bloomington.

To achieve these goals, schools use their aid to draw wealthier students — especially those from out of state, who will pay more in tuition — or higher-achieving students, whose scores will give the colleges a boost in the rankings.

Private colleges have been using such tactics aggressively for some time. But in recent years, many public colleges have sought to catch up, doing what the industry calls “financial-aid leveraging.”

The math can work like this: Instead of offering, say, $12,000 to an especially needy student, a school might choose to leverage its aid by giving $3,000 discounts to four students with less need, each of whom scored high on the SAT, who together will bring in more tuition dollars than the needier student.

According to the article this trend may escalate as state universities are held more accountable for graduation rates.