College costs have been steadily increasing since the 1970’s. As of late, the costs have continued to sore at an even faster pace. Accompanying the rise in college education costs is student loan debt. In fact, the recent 2012 grad owes over $29,000 in student loans. This is up from more than just over $9,000 in 1993. With this increasing burden on America’s younger generation it would seem logical to lower the federal interest rate on student loans.

Current students are paying about 4.66% interest on student loans, although there are many others who have interest rates which are locked in at above 9%. It seems obvious that higher education is vital to America’s economical future. Having a well educated public defines a society and an economy. Despite this however, lawmakers are rejecting proposals to lower federal student loan interest rates. In fact, government seems to believe banks should pay lower interest rates on federal loans than students. Banks pay a rock-bottom interest rate of only 0.75%.  College costs are a huge issue plaguing the prospective college student, but it seems the government prefers to see banks prosper than young Americans invest in their own futures.

As many Americans struggle with paying back college debt the government seems to turn a cold shoulder. College costs and debt should never be a matter of politics; yet as many struggle to pay back debts, government struggles to see the problem in favoring banks over students.

CSCubed is preparing for AICUP Student Lobby Day in Harrisburg on April 1. Our primary goal is to convince legislators to commit funding to a new PHEAA grant program that helps middle class students pay for college. Leading up to Lobby Day we’ll be providing more information as to why this new grant program is so important. 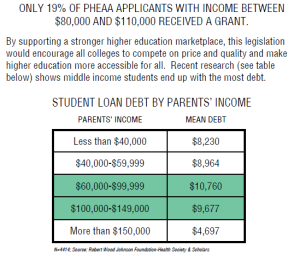 The middle class is hit hardest by student debt because they are not wealthy enough to pay for education out of pocket and not poor enough to qualify for programs like Pell Grants. Consequently the new middle income PHEAA grants that CSCubed supports will help a population that has the most student loan debt of any income category.

In an article from Forbes Magazine, contributor Steve Odland provides some cold, hard numbers concerning the rising costs of college. Odland reminds readers that a there is a correlation between the amount of education a person has received and their average income. People without any college education earn almost $18,000 a year less than the US average wage, and less than half of what someone with a four year degree makes. While it is said that everyone has the same opportunities to receive this education, it is obviously not the case. Only 17% of the US population has earned an undergraduate degree, but the costs of college may change this in the future. Accounting for inflation, Odland states that while the consumer price index has risen 115%, but college education inflation rate has risen nearly 500% since 1985. Even with government aid, private funding, and scholarships, many students in today’s education system still have to take out loans which accrue interest. Odland attributes this rise in costs to the tenure policies, and the rise in spending on administration for the institutions rather than on professors or other capital expansions that would benefit the colleges.

Today, one out of four students with loans cannot afford to pay them back. According to the Consumer Financial Protection Bureau, about 25% of graduates are in default with their college loans. The issue with these loans is there is no guarantee for financial prosperity and a way to pay for them out of college. Higher education does not have the same value as it once did in the economic world. The job market is weak and the average student owes more than their annual income straight out of college with an entry level position. However, Georgetown University’s Center on Education and the Workforce states that a bachelor’s degree pay is higher than a high school graduate’s by 84 percent. In this case, the price of college needs to be reasonable and it is not.

CSC3 is always looking for ways to cut the costs of college education and ensure that students do not end up with insurmountable debt in their post-graduation years. However, this proposal in the California legislature to have test-only colleges might not be one of our potential solutions. Check out the story in the Los Angeles Times.